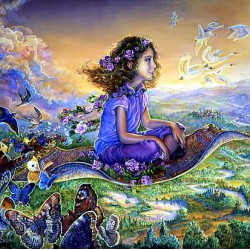 Review: Daughter of the Forest by Juliet Marillier 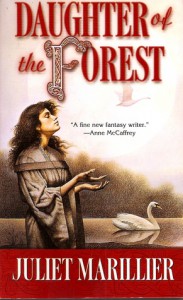 This is...a surprisingly popular book, given that it's much denser, laboriously written, and slower-paced than most YA. I don't say this to be demeaning, just that I had a bit of a struggle reading this, and mostly persevered for the sake of following through with the fairy tale, as this is based on the Six Swans Brother Grimms story, one of my favorites. There's a sense of comfort and familiarity to know what to expect in fairy tale retellings, because following the template of a beloved story makes it hard for authors to pull crap out of thin air. We are, essentially, just waiting for the expected stuff to happen, the fun is in actually seeing the whole thing roll out. Marillier combines this familiarity with a slow, thoughtful style that takes some getting used to, making for an impressively surreal experience.

Daughter of the Forest is about many things, but I would say that it is most principally a story about trust. What does it take to destroy our sense of trust of our fellow human beings? What does it take to rebuild it? It's not just limited to the main character, either. We see this also in Simon's character, who, after being physically tortured, struggles to overcome the resulting psychological trauma, and is slowly healed through Sorcha's persistent care.

This is a theme that is actually not present in the original Grimms fairy tale, at least not in the individual, personal way. There is, of course, the theme of cultural/societal trust, in terms of a community's suspicion and paranoia towards a foreign girl without the ability to talk, and Daughter of the Forest also touches on this extensively.

I give it 3.5 stars rather than 4 because I'm inclined to think that any time a YA author deals with a heavy, heavy subject (like rape or isolation, in this case) with a societally-approved amount of gravity and darkness and depression, it immediately gets lauded because "at least it doesn't perpetuate rape culture," "it made me cry buckets of tears," etc. etc.

Does Daughter of the Forest really portray the psychological consequences of rape and isolation in a realistic way? Yes, in many ways. The darkness of the original tale is captured quite well in this retelling--because honestly, not being able to speak for years on end, staying alone in the wild doing nothing but weaving shirts, being dragged into a foreign land, and becoming the target of suspicion just because you don't have the ability to defend yourself, then nearly burning at the stake as a result, has got to be a scary experience. Marillier drives this home especially with a brutal rape scene, and I think the real psychological trauma that Sorcha experiences starts from there. The whole story, in retrospect, is structured around Sorcha's loss of innocence, and the loooooooong healing process needed to return her to a normal and emotionally healthy life.

Given that, it took me a while to figure out why the resolution of this story arc didn't satisfy me, because Marillier does do a good job for the majority of the story of showing what happens when you lack emotional support for long periods of time, then have bad things happen to you one after another until the pressure of feeling too alone becomes nearly crushing.

That's what makes the darkness of this tale sympathetic, to me. It's heavy, but it's also cumulative, and it's not so much depressing in and of itself as it is in the sense that it stretches the average person's human tolerance for...well, having shitty things happen to you. That's why even though this novel is slow, it gets much easier to read the further you get into it. Plus, there's a light at the end of the tunnel. Anyone familiar with the Six Swans story knows that the girl succeeds in getting her brothers back and escapes getting burned to death, despite being threatened with failure on both counts. It's a happy ending that's earned through blood, sweat and tears, and that's what I think gives the original Six Swans story its sense of balance in terms of structure and tone. It encompasses our expectations of the human experience, challenging the main character with near-insurmountable adversity but underpinning it with a sense of hope for when the task (weaving the shirts to free the six brothers from the spell) is finally finished. Each emotional stage of the story is unfolded to us very evenly, with an equal emphasis on the obstacles facing the main character as well as what it takes to overcome them: the love of the king who marries her, her own perseverance, and simply being committed to the task long enough to the point that it would be a bit of a waste to turn back.

Marillier goes deeper into this obviously, exploring this story from a 1st person perspective of the main character. Because of this, there is an added psychological aspect to this story...not that the original fairy tale doesn't have it, but the audience gets a very intimate portrait of what Sorcha's internal life looks like, the process by which she changes, sometimes in a way that Sorcha doesn't even quite realize herself. Examples of this include her romance with Red, which progresses (as most readers pointed out, and loved) almost completely subconsciously. Mostly this is because she's been raped, and Red is an...er....really big and strong guy, so there's the sense of physical mistrust to overcome.

Men will look at you. Come to terms with it, Sorcha. You cannot hide forever. They will look at you with desire in their eyes. You were taken against your will, and it damaged you. But life goes on. It sounded logical. But I thought, still, that I would never be able to feel a man's touch without fear.

By the way, this internal monologue of Sorcha talking to herself is following a scene where Red catches a glimpse of Sorcha in an attractive dress and she runs away in terror. Call it a gut reaction to the Male Gaze, if you will.

Anyway, my point is that parts like this aren't just for Sorcha. This scene is also for us as the audience, showing Sorcha's psychological damage by having her rationalize her fear. We can see how messed up she's become, because she's trying to force herself to adapt to a completely unfair expectation ("get used to getting stared at by guys") that she simply isn't capable of meeting. At the moment though, she isn't aware of that. She's just trying to survive and pull herself together without going crazy under all the pressure.

The resolution of this thread, Sorcha's conflict with her sense of physical self, comes in the end (and yes, this is a sex scene, but it's hard to talk about this without quoting, so cover your eyes or something if this bothers you):

...as we lay together that first time, there was one moment when I gasped in remembered fear, and my body froze and trembled. But Red held me, and stroked my hair, and spoke to me softly, little words under the breath, and he watied for me. And, at length, my body opened to his like a flower, and we moved slowly together, and then more quickly, and we sighed and cried out and found release in each other's arms. He showed me that the union between man and woman is, indeed, something to wonder at, and revel in, and laugh over.

...Ok, it's going to be hard to explain my reaction to this scene, my thoughts are kind of jumbled all over the place, but I'll try.

First, I think Sorcha's attitude towards her sexuality here is noticeably modern. And it comes out of pretty much nowhere. The societal attitude towards female sexuality portrayed in this story is shown to be one that is very suppressive, as it probably was in the Dark Ages. I don't mean to go all "over-analyzing English paper student" on you, but it IS something that Marillier spends a looooooooot of time developing. We see this when Sorcha is being slandered against in court, one of the charges being the pursuit of illicit sex. She's constantly under suspicion for being a whore. More importantly though, it's a prejudice that Sorcha has internalized herself, as can be seen with her "evil stepmother," Lady Oonagh, who seduces her father with her feminine charms and all.

Second, a common complaint of this scene with readers is that it's far too short and "fades to black," after all the comparably big word count devoted to acts of graphic violence against Sorcha. I agree with that, but not because the story necessarily needs an equal depiction of loving, consensual sex to balance out the violence. It's because Marillier tells us what to think, rather than shows, which no amount of impressively lyrical language can hide. And I honestly think at this point in the story there's no way this part is entirely consistent with the rest of the story--the tone is too straightforwardly cheerful, plus we don't see enough of the emotional change actually happening in Sorcha, we're just left to assume it does. For me, that watered down the sense of permanent loss I kept looking for the story to give--that even though Sorcha finds her happy ending, there's no way to erase everything she had to go through to get it. How do you reverse the effects of what was done to you, much less start completely anew? Sorcha's internal life--particularly the long-term consequences of the earlier rape--is essentially kind of squashed down there, a little bit, without the dynamic complexity that is shown so vividly in the earlier 90% of the story. This odd detachment of tone is, unfortunately, quite a common cop-out route for many YA authors when they don't know how to properly finish what they've started, or deal with a difficult subject matter in a complete and decisive way.

Don't let my review prevent you from reading it, though. This is a dark and powerful read that has stayed with me for quite some time. The writing style forces the reader to process things the same way Sorcha does, with a great deal of thought and patience and perhaps a little pain. It's a story about the destruction of trust and the rebuilding of that trust through a relationship with someone whose respect and concern Sorcha never has to ask for, along with a few villains who are deliciously fun to hate.